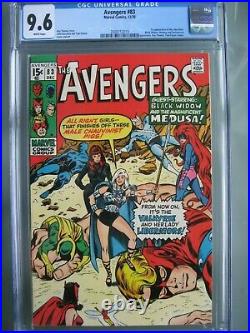 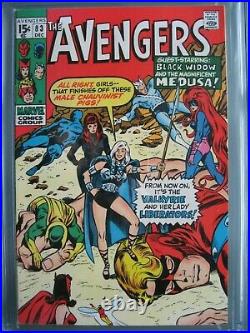 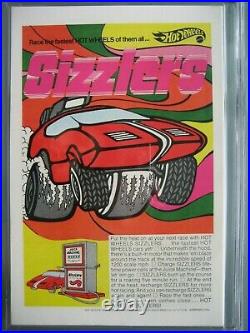 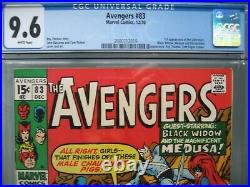 Black Widow, Enchantress & Medusa Appearance. Roy Thomas & Tom Fagan cameo. Roy Thomas (Story) John Buscema & Tom Palmer (Cover & Art). Returning to Avengers Mansion to visit, the Wasp soon finds herself witness to the gathering a new all-female group called the Liberators (consisting of Scarlet Witch, Black Widow, Medusa and newcomer Valkyrie) Who have banned together to battle male oppression. Valkyrie explains that she was a scientist at a male-dominated science lab, and when attempting to show up a chauvinist co-worker, she exposed herself to a chemical that gave her superhuman strength, and so she decided to form this hero group, and has convinced each of her recruits to join by feeding on an apparent double standard in being a super-hero.

With all of them siding with her, Valkyrie takes them aboard her chariot and heads off to Rutland, Vermont. In Rutland, are the male members of the Avengers, who are there attending the annual Halloween festivities where the townspeople all dress up as super-heroes. They are unaware that the Masters of Evil are also in attendance, seeking to capture a hostage in a plot to get revenge on the Avengers for their previous incarceration. While the initial plan fails, and a battle between the two groups starts, the Masters manage to get the upper hand, that is until the Liberators show up. The newly formed group makes short work of the Masters, and when the Avengers thank the women for saving them, they are attacked and easily defeated as well.

Suddenly, Valkyrie knocks out all her comrades and reveals that she is really the Enchantress in disguise. She explains that after her last failed attempt at taking over Asgard failed (in Hulk #102) she and the Executioner were banished to a barren neither world. There, the Executioner abandoned her for the a mysterious woman who appeared to offer the Executioner her love. Feeling betrayed, the Enchantress vowed revenge on all men and used the Valkyrie disguise and the formation of the Liberators to met this end. The Scarlet Witch frees herself and battles the Enchantress, defeating her by using a hex bolt that redirected the Enchantress' magic back at her.

She then frees her fellow Avengers and reveals to them that she realized they were really facing the Enchantress when earlier in the day (as Valkyrie) she called the Wasp a "wench" in a tone that as the Enchantress she used on the Scarlet Witch in a past battle. You, Medusa -- with the living tresses of incomparable power -- you are the greatest slave of all! Your precious Black Bolt does not even speak -- yet you hang upon his every non-syllable! The item "Avengers #83 CGC 9.6 WP 1970 1st app Liberators & Valkyrie" is in sale since Tuesday, August 27, 2019.