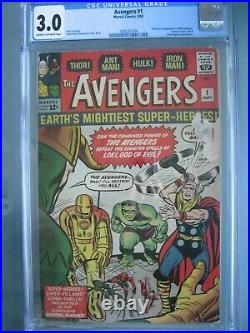 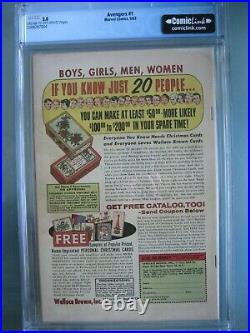 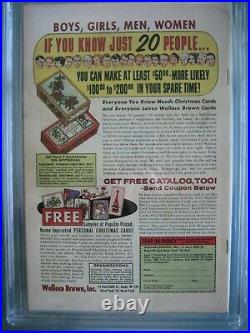 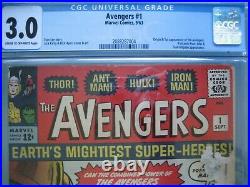 Fantastic Four, Loki & Teen Brigade Appear an ce. Stan Lee (Story) Jack Kirby & Dick Ayers (Art & Cover). In this early Silver Age issue published in 1963, Earth's Mightiest Heroes - Hulk, Iron Man, Thor, Ant-Man and the Wasp - came together to form Marvel's most powerful super-team to combat the evil of Thor's half brother Loki. Was an unabashed success for Marvel on Silver and Bronze Age newsstands and remains a vital book in comic book shops today. #1 is one of the most highly sought-after of the early Silver Age Marvel keys and has long been a favorite among collectors.

The movie franchise has made the beloved team a household name; both the first Avengers feature film and its sequel earned over a billion dollars at the global box office. Interest in high quality examples of the team's early appearances continues to rise, and of course this premiere issue is the most important and desirable. This is a solid CGC 3.0 example for.

The Coming of the Avengers! Loki, having been previously captured by Thor, is being held prisoner at the isle of Silence in Asgard.

His physical form may be confined there, but by means of thought projection his disembodied self travels to Earth in search of revenge. He spots Thor in his human identity of Dr. Don Blak, but resists defeating him as it would be a hollow victory compared to defeeathing him as Thor. After hours of searching, Loki happens to cross the Hulk and devises a wicked plan to entice Blake to transform into Thor. He projects a mental image of dynamite on the tracks of a nearby railway bridge. The Hulk spots the dynamite and attempts to snuff it out, accidentally destroying the bridge. Suddenly, a train appears on the tracks traveling towards the wreckage. Valiantly, the Hulk manages to hold the tracks up long enough for the train to pass safely before alowing it to collapse. Unfortunately the damage has already been done and Loki's plan was successful. Hours later, newspapers print articles about the Hulk being on the rampage again and a manhunt begins. The Hulk's friend, Rick Jones, reads the article with disbelief and meets with members of the Teen Brigade.

In order to find help to track Hulk down to find the truth. They attempt to contact the Fantastic Four. But Loki interferes with the radio signal, diverting it to Don Blake. He decides to transform into Thor to help the Teen Brigade. Unknown to Loki, the radio signal is also picked up by Ant-Man, the Wasp, and Iron Man, who also travel to assist.

Later, the Teen Brigade are disappointed that the Fantastic Four hadn't responded to their message when they finally get a reply. They inform the Teen Brigade that they are too busy with another case but they have a hunch that other heroes may have received their distress call.

Suddenly Thor, Iron Man, Ant-Man and the Wasp arrive. Loki realizes that the other heroes will only interfere with his plans and lures Thor away by creating a mental image of the Hulk. Upon catching up with this fake "Hulk", Thor attacks and realizes it isn't real, and immediately suspects Loki.

Meanwhile, Iron Man, Ant-Man and the Wasp track down the Hulk with the help of Ant-Man's ants. He is working at a circus pretending to be a robot called Mechano.

They attempt to capture him by causing the ground below him to cave in, by dropping a steel cylinder onto him, and trying to catch him in a net. Hulk manages to escape the circus. Iron Man gives chase but the Hulk cripples his battery, and escapes while Iron Man repairs it. Back in Asgard, Thor asks permission from Odin to meet Loki on the Isle of Silence to question him. Odin accepts but warns that he cannot interfere between the two brothers' quarrel. As Thor sets out across the Sea of Mist he is attacked by Loki's traps. First, he narrowly escapes tangle roots that threaten to drag him down into the depths. Next, a volcano erupts releasing volcanic gas globules capable of sapping the strength of any god. Thor manages to evade these by diving into the sea.

On the island, Loki spots Thor's empty boat and wonders with disbelief if Thor has already been defeated. Suddenly, a giant water spout appears in front of him as Thor emerges from the sea to face him. He throws his hammer at Loki, only to have it deflected by a hastily-made ice shield. Loki calls upon a Rock Troll, which begins to drag Thor beneath the ground.

At the last moment, Thor uses his hammer to summon lightning which dazzles the troll, causing it to relinquish his hold. Thor angrily swings his hammer at Loki, who has created multiple mental images of himself to confuse him. Thor counters this by spinning his hammer fast enough to blow all the figures away, revealing the true Loki. Soaking up the magnetic flow from the earth with his hammer, he captures Loki via magnetic attraction and takes him back to Earth to clear the Hulk's name.

On Earth, Iron Man, Ant-Man and the Wasp continue to pursue the Hulk to an auto factory in Detroit. Thor appears with Loki to clear Hulk's name. Suddenly Loki makes himself radioactive forcing the heroes to retreat. Luckily, Loki stands over a trapdoor and Ant-Man's ants trigger a switch, dropping him into a lead-lined tank.

Upon celebrating their victory, Ant-Man and the Wasp point out how well they could work as a team, and that they should work together in the future. The Wasp suggests they should call themselves the Avengers, and everybody agrees. And there came a day, a day unlike any other, when Earth's mightiest heroes found themselves united against a common threat! On that day, the Avengers were born, to fight the foes no single super hero could withstand! Before we separate, the Wasp and I have something to say! Each of us has a different power! If we combined forces, we could be almost unbeatable! There is much good we might do! I'm sick of bein' hunted and hounded! I'd rather be with you than against you! So, whether you like it or not, I'm joining the... What are you callin' yourselves? It should be something colorful and dramatic, like... We'll fight together, or separately, if need be! I pity the guy who tries to beat us!